The work has clearly been mistreated and needs attention 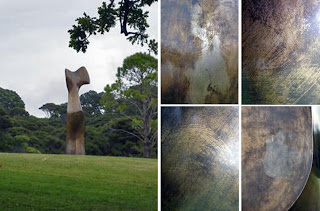 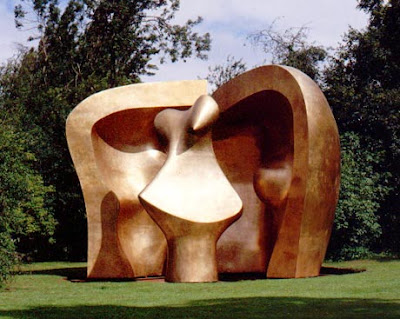 Knife Edge Mirror Two Piece's large scale and difficult-to-reach areas (created by the curving forms) present unique challenges to the conservation team during the annual cleaning and maintenance. In order to treat every inch of the sculpture, at least six people must work a minimum of three days, using an elaborate system of mechanical lifts, scaffolding, and ladders.

Treatment of Knife Edge Mirror Two Piece begins with a thorough inspection of the sculpture. Next, the team rinses both pieces with water, using a pressure washer on a low setting. The sculpture is then washed with water and a mild, non-ionic detergent without perfumes or colorants. This step is the key to removing the dirt, pollen, and pollutants that disfigure the sculpture. Left untreated, these pollutants would eventually lead to corrosion of the metal and loss of patina. Finally, the sculpture is waxed and buffed. Applied by hand, the protective wax coating (consisting primarily of carnauba wax mixed with other natural and synthetic waxes) preserves the brown-red patina. The highly polished surfaces, however, are especially vulnerable to changes and require additional treatment. These areas are polished with an extremely fine grade of microalumina powder and coated with a synthetic resin before being waxed. The entire sculpture is buffed, both by hand and with mechanical devices.

Image: Bronze Form as it was originally intended as part of Large Figure in a Shelter
Posted by jim and Mary at 9:01 AM No comments:

Collect them while you can

A sinking feeling about Venice
The Dominion Post | Saturday, 28 February 2009


New Zealand's last exhibitor, Merylyn Tweedie - who presented a jumble of wires, boxes, furniture and computers that, according to one reviewer, looked and smelt like a building site - refused to talk to journalists.

The London-based Ms Upritchard also deserves commendation for her candour. No, her art doesn't really have anything to say about New Zealand, she told The Dominion Post. No, she doesn't want it to, and no, she doesn't care.

Clearly Ms Upritchard hails from the same school as David Cerny, the Czech artist who was commissioned by his government to produce a work celebrating the Czech Republic's presidency of the European Union.

It was not until the work, Entropa, was installed at the European Council building in Brussels that anyone noticed he had treated the commission as a practical joke. In a giant, stylised jigsaw puzzle, Bulgaria was depicted as a hole-in-the-floor toilet, Luxembourg as a tiny lump of gold with a "For sale" sign attached to it, France as being on strike and the Netherlands as being under water.

The work, which is still on display and, according to some reports, is appreciating rapidly in value, has generated amusement for those who are not the butt of Mr Cerny's humour, but embarrassed the Czech Government, which had wanted to celebrate the glory of a unified Europe.

Unfortunately, it is unlikely that Ms Upritchard's Biennale exhibit will attract anything like the same attention. If it fares anything like Ms Tweedie's, it will sink without trace.

But she operates according to the same principles asMr Cerny. Take the money and cock a snook at thoseout of whose pockets it is coming.

It is costing Creative New Zealand $650,000 to exhibit her work psychedelic-coloured medieval figures and the three-dimensional paintings of fellow exhibitor Judy Millar, who also seems perplexed by the notion that New Zealand should benefit from her presence in Venice.

"I think there is a problem in New Zealand in that New Zealanders seem to want art to be able to be used for some reason," she said.

Ms Upritchard is perfectly entitled to produce psychedelic representations of whatever she likes. The same holds true for Ms Millar. Neither is obliged to focus on New Zealand subjects. Nor are they obliged to explain their work to philistines who are not immediately struck by its brilliance.

But their independent stances would ring truer if they did not rely on funds from New Zealand taxpayers, many of whom are contemplating an uncertain future, to exhibit in Venice.

Perhaps it is Creative NZ that should be answering the questions. Why is it spending more than half a million dollars exhibiting work overseas that says nothing about New Zealand and can be seen only by the handful of New Zealanders wealthy enough to travel to Italy?

Surely it could find a better use for the money. If it cannot, there are plenty of cash-strapped taxpayers who could.
Posted by jim and Mary at 3:31 PM No comments: