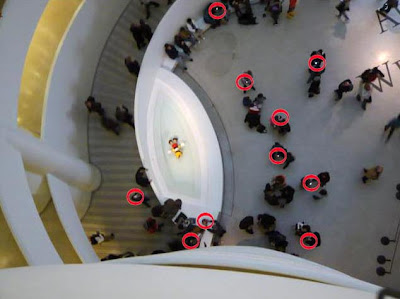 New Plymouth's prestigious Govett-Brewster art collection has rocketed in value so much that it is now worth three times the government valuation of the building that houses it.

This value does not include the $140,000 the Govett-Brewster Foundation and the New Plymouth District Council paid last month for eight new works for the collection.

The value is also separate to the value of the Len Lye collection which comprises around 4000 items and is also stored at the Govett-Brewster.

Art enthusiasts in New Plymouth say the size and value of all these collections, and the fact they are currently held in increasingly cramped storage facilities, underline the importance of the proposed $10 million Len Lye Centre.

This centre, proposed to be built alongside the Govett-Brewster gallery, would house the Len Lye collection which would free up space for more efficient storage of the gallery's collection.

District councillor Lance Girling-Butcher, who is also chairman of the council's Len Lye committee, said storage room at the art gallery was now getting critically short.

"The climate control system is also getting near the end of its useful life, and this year there have been problems with leaks," he said.

"It is important that this is rectified, given the value of the collections that are housed there."

Len Lye supporters must raise $10 million to build the centre before the council will fund the annual operating costs, and even now there is debate over whether ratepayers should meet these costs.

Mr Girling-Butcher said the committee was working hard to get the operating costs down, and he was confident this would happen.

And he added the latest information showed how important it was for New Plymouth to have improved facilities for storage of its internationally-recognised art collections.

"It's a complex and interlocking thing," he said.

"Even if we don't get the Len Lye Centre, we're going to have to invest in upgrading the storage facilities."

Govett-Brewster director Rhana Devenport said the gallery's collection, although still modest in its size when compared with other collections at the likes of Te Papa, was a very important contemporary collection.

"It's hats off to all the previous directors for the job they have done," she said of the collection, which had its beginnings in 1970.

"What they have done over the years is buy up important artworks soon after they were created - that's where they have really added value. For example, one Colin McCahon work called Am I Scared, purchased in 1976 for $500, now has a value of $450,000."

Ms Devenport said the need for more space to permanently house the collections was now getting desperate.

"We really do have a tiny amount of storage space left, and the collections are growing all the time."

From: Heather Galbraith
Posted by jim and Mary at 12:04 PM No comments: 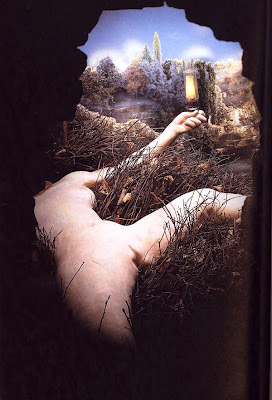 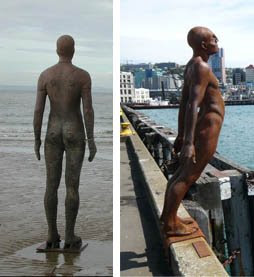 Answers to First words on OTN 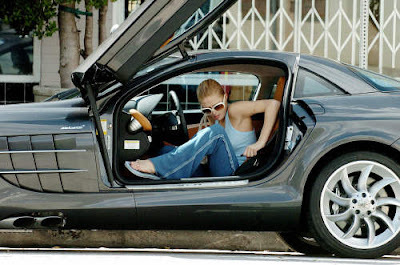 Paris Hilton trying to get out of a sports car.
Posted by jim and Mary at 11:59 AM No comments:

We are delighted to announce that City Gallery Wellington is entering a crucial period of growth and change, embarking on a $4million development initiative. The Gallery closes for development construction, as well as seismic strengthening of the existing building, on 19 October 2008 at the conclusion of the Fiona Hall: Force Field exhibition.

The development project, designed by award-winning architect Stuart Gardyne of Architecture+, will involve a new two storey addition as well as seismic strengthening of the existing building.

The enlarged, new-look City Gallery Wellington is scheduled to re-open in early September, 2009. Follow the progress and keep up to date at www.citygallery.org.nz. 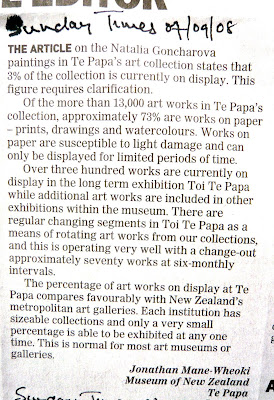 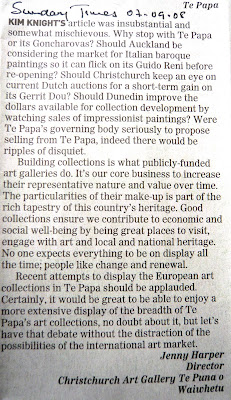 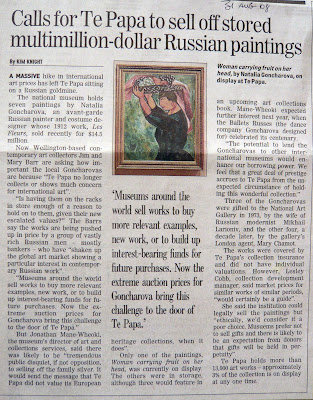 Kim Knight in the Sunday Star Times 31 August in response to the OTN story The 12.8 million dollar question. See also Sellers Market follow up. Click to enlarge.
Posted by jim and Mary at 5:41 PM No comments: